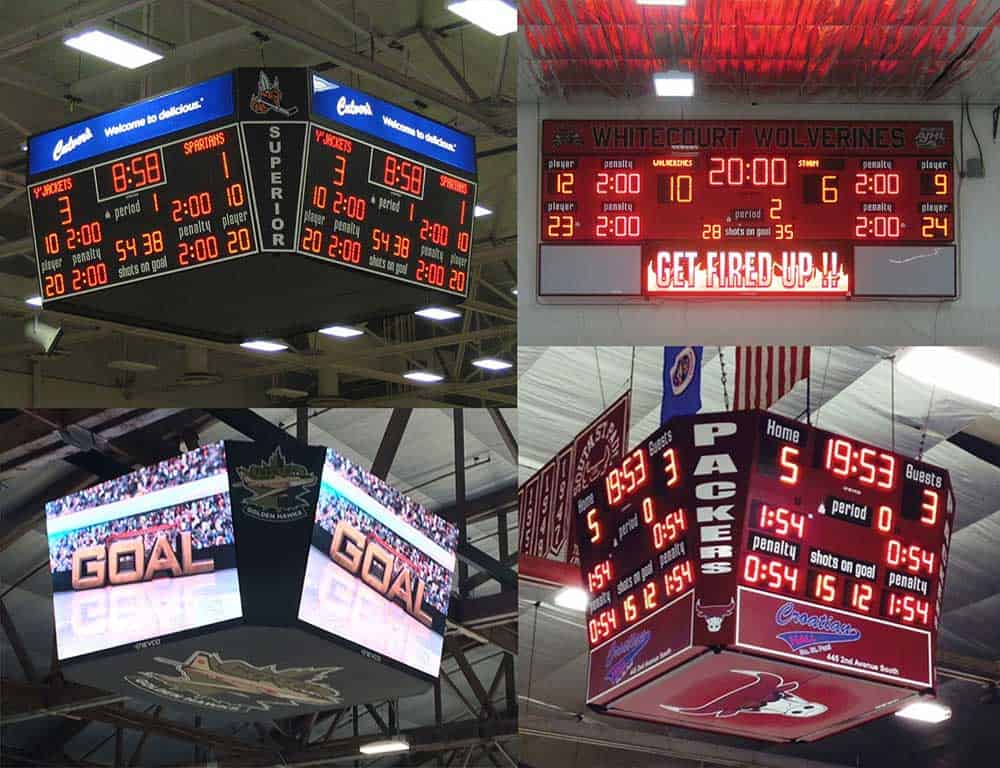 A scoreboard is a large board for publicly displaying the score in a game. Most levels of sports from high school to professional leagues have at least one scoreboard for keeping score, measuring time, and displaying statistics.

Back before electronics were mainstream, scorekeeping was kept track with numeric cards that hung on hooks.  In the 1980’s we started to see scoreboards advance from electro-mechanical to light emitting diodes boards.

These boards were a major advancement in the sports world.  The lights lasted for thousands of hours and the scorekeeper could update the score with a touch of a button. Everyone was pleased with the upgraded technology and most switched over to these boards which today we now refer to as ‘traditional score clock’.

In the last couple decades technology has evolved so quickly, including the AV industry.  From old-school tube TV’s to flat screens to 3D and now curved displays. In the 2000’s we started to see the video walls emerge and popularity grow.  The first-generation video walls were done by placing together multiple displays to make one large screen.  Now the main go to it is LED panels where the image is seamless, and images are bright enough they can be seen in broad daylight.

As the media walls have become more affordable over the years, they are quickly replacing traditional scoreboards.  There are numerous benefits of a media wall that are enticing people to scrap the traditional and upgrade.

So why choose a media wall over a traditional score clock or projector?

With a traditional scoreboard you can keep track of the score and a few other basic game components; aside from that, this large board hanging on the wall does not provide much more use.

A full motion LED video wall is not only a scoreboard but now can be used for anything media that one could want to display.  Instant replays, intermission entertainment, live camera…

Utilizing the video scoreboard in place of a traditional scoreboard provides many advantages that make the transition a no brainer.  A bright screen that can play and display absolutely anything you want vs just being a scoreboard.

Although it may be an additional 15-20% outlay of funds to procure a media wall vs a projector, in the long run most are glad they made the choice.

dEm has been supplying and installing media walls for 10+ years in all types of applications including education, corporate, houses of worship, entertainment… Contact us today for more information and to obtain your media wall quote today.

The talented team at digital EDGE is dedicated to creating functional spaces that provide for the unique needs of our clients. We do not set limitations for ourselves, and therefore, there are no limits to what we can achieve for our clients.